Our Founder: Born at Bilaspur(M.P) on 12th Dec. 1872, Dr. B.S Moonje had his school life at Bilaspur and Raipur; and became the Doctor from Grant Medical College Mumbai in 1898. He participated in Boer war (Africa) in 1899,as a member of medical wing.

Our School: Bhonsala Military School, Nasik was established by Late Dharamaveer Dr. B.S Moonje, who was a firm believer of Indianisation of the Armed Forces during the British rule and indispensability of military training to Ondian youth. Dr Moonje formed the Central Hindu Military Education Society at Nasik in 1935 and started the school on 12th june 1937.

Bhonsala Military School, Nasik was established by Late Dharamaveer Dr. Balkrishna Shivramji Moonje, who was a firm believer of Indianisation of the Armed Forces during the British rule and indispensability of military training to Indian youth. Dr Moonje formed the Central Hindu Military Education Society at Nasik in 1935 and started the school on 12th June 1937.

The school started functioning in the Surgana Palace in Nasik city with 90 students on its roll. The Maharaja of erstwhile Gwalior state, H H Shriman Jivajirao Scindia inaugurated the main building of the school. In his inaugural speech, He said, "It is not a mere coincidence that within a short period of the opening of a first rate public school in India (he was referring to the Doon School, Dehradun), we are here today to open a first rate Military School." Such was the charishma, charm and aura of the founder, that he made the then Governor of Bombay State, Sir Roger Lumley to lay the foundation stone of the present main building of the school.

Over the years, the school has established itself as a premier residential school catering for educational needs of students from all over India and also as a focal point for Military Education. In 1995, the school was granted affiliation by Indian Public Schools Conference, an association of heads of leading public schools of the country.

The registration form for seeking admission is available on the school's website from 27 January Every Year.
At the time of entrance exam, the prospectus along with the admission form will be provided on the payment of Rs. 710 /-. The form fees should be sent or paid to the school office by Demand Draft only, in favour of "Commandant, Bhonsala Military School, Nashik", payable at Nashik.
The first instalment of school fees has to be pay in school office through the debit/credit card/ net banking at the time of admission confirmation.
The following documents must be submitted by the parents along with the application form

The candidates age between 14.5 to 17 years on 31st July of this year are eligible.

Educational Qualification for admission in NDA Batch at BMS

Candidates who are appearing /appeared in class 10th Board Examination with Physics, Chemistry, Maths and English subject as well as secured 60% marks in Class 8th, & 9th standard examination are eligible to appear.

A detail coaching for the subjects of UPSC (NDA) examination is given to students by dedicated & experienced faculties, Stress is also laid on improving their communication in English. They are given practice in Lectures, Debates, Quiz Competition, and Group Discussions. The curriculum is so structured that students are by default prepared to face the SSB Interview. Apart from UPSC (NDA) syllabus, the school conducts academic classes for XI and XII std in subjects like English, Maths, Physics, Chemistry, GK, Defence Studies and Biology. Each student gets minimum two chances to appear in the UPSC (NDA) examination while he is at Bhonsala Military School in XII standard, i.e. in September and April.

It is conducted by Bhonsala Military School in the month of May (2ndSunday) every year. The subject wise syllabus and marks distribution for the Entrance Examination is as given below:- 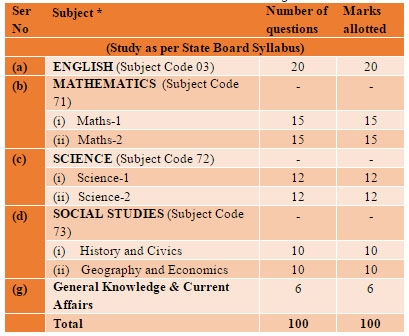 Fess can be paid through NEFT / RTGS / Credit Card / Debit Card Only
Details for NEFT / RTGS are as follows:
NAME - COMMANDANT BHONSALA MILITARY SCHOOL
BANK NAME - HDFC BANK LTD
BANK NUMBER - 50100217027870
IFSC CODE - HDFC0000064
BRANCH NAME - THATTE NAGAR, NASHIK
5 % concession will be applicable only for onetime full payment of Fees.
Fee Will be paid in given Installments only.
No cash will be accepted.
PAYMENT OF FEES & OTHER DUES
1) Kindly note that the fees and other deposits etc. are subject to revision from time to time.
2) The parents/guardians are requested to note that withdrawal of a ward in between the academic session would entail payment of full fees for the complete academic year.
*Subject to future Decision of Management